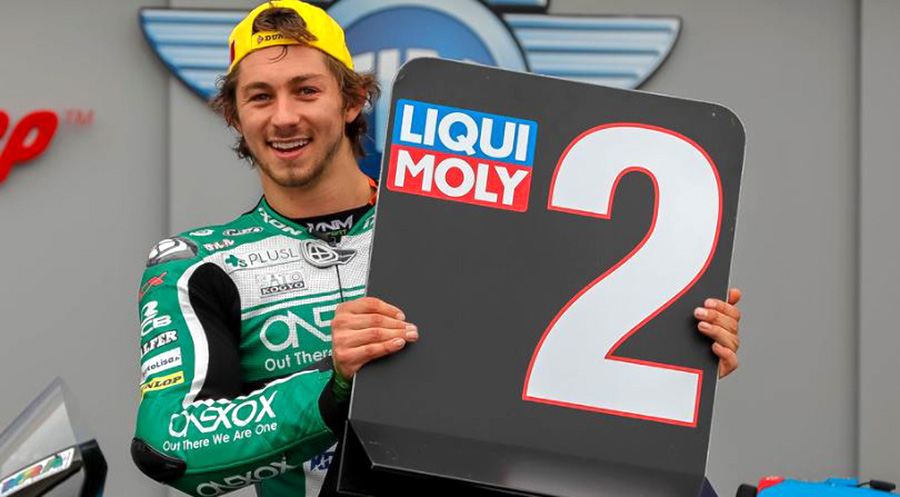 Remy Gardner converted a front row of the grid starting position into a podium finish in the latest round of the FIM Moto2 World Championship at Le Mans, France, earlier today.

Initially leading, Remy did well to save a potential high-side with twenty laps to go. Dropping to fifth, the #87 regrouped, ensuring he remained in contention as the race progressed. Lapping consistently, he withstood the pressure from behind, moving into third when long time race leader Jake Dixon crashed out with several laps to go.

Starting le dernier tour in third, Gardner dug deep, producing a final lap that will no doubt go down as one of the laps of his career to date. Biding his time, Remy pounced on the penultimate corner to snatch second at the flag, equalling his career best finish in the process.

The season continues next weekend at the MotorLand Aragon circuit in Spain, with Remy confident of another strong showing at a circuit he’s gone well at previously.

Remy Gardner:
“After a difficult day on Friday qualifying went well. I was happy to be back on the front row and really looking forward to the race. The race was almost perfect. I am extremely happy to finish second after what was a really long race. The team did a great job all weekend, we were very smart from Friday to Sunday and in the end, we pulled it off. Second is valuable points, it’s my best result in GP racing and hopefully means we can end the season strongly. Big thanks to all the fans for their support, especially those on Twitter – I just hit 10k followers which is insane. Couple of days to recharge and then we go again at Aragon. See you there!”