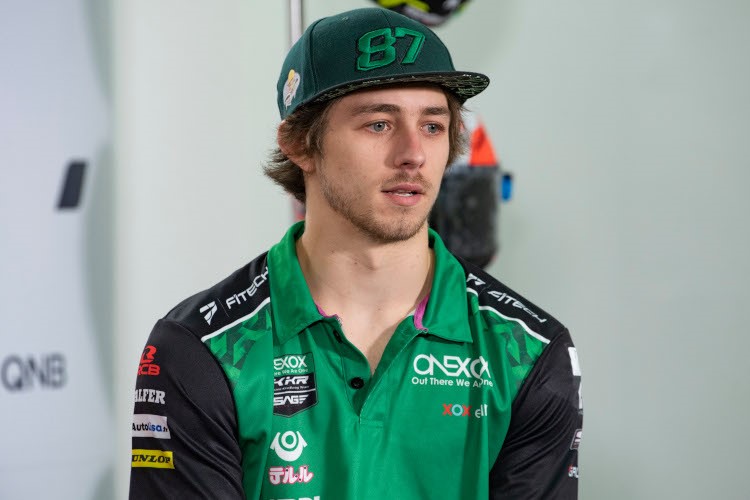 Translated from the original interview in German by Nora Lantschner
Photo: Gold & Goose

SAG driver Remy Gardner has a big goal for the 2021 season: the 22-year-old Australian wants to make it to the MotoGP World Championship. But the corona-related forced break made the project more difficult.

Remy Gardner was on the podium for the first time in his career last year in Las Termas / Argentina. In 2020, the Kalex driver from the Onexox TKKR SAG team started the season in 5th place in Doha before the corona crisis also paralyzed the Motorcycle World Championship.

The 22-year-old Australian has been living in Spain for eight years, which was particularly hard hit by the pandemic: 213,024 coronavirus cases have been registered there so far, 22,157 people died in connection with Covid-19.

“I’m fine,” says Remy Gardner in an interview with SPEEDWEEK.com. “I live in Sitges, 20 minutes outside of Barcelona. We have the lockdown here as in Italy. People still go to work, but of course only under certain conditions. I have a workshop for my bikes and things like that, I have a business there, so I can escape from home.” Among other things, he is screwing on a classic car there . “I’m installing a new engine – with a lot more horsepower. It’s a lot of work, but at least that’s how busy I am,” he smiles.

It is not yet clear when the 2020 World Cup season can continue. You live in hard-hit Spain, how do you assess the situation? The Grand Prix in June and July are still on the calendar, but that’s very optimistic. Some speak of September, the worst-case scenario of a complete cancellation of the season must also be taken into account.

I think Dorna does it as well as it can. They do a good job and help the teams. It’s great because it’s tough times for the teams, the mechanics and us drivers.

June could be too optimistic, July… (He sighs.) With every day that comes and goes, you feel like it takes longer and longer… And every two weeks there is a new order that the curfew is extended. And another two weeks. One wonders: is there really an end in sight? It’s very tough, especially for the teams. How should they send the sponsors an invoice if they have no money left for it? As I said, it is a difficult situation.

Yes, with the team boss and the mechanics, we are all friends. We are in contact, but they don’t know much more than I do. I don’t think Dorna knows either. It really depends on how the situation is in the countries, around the world  – and the restrictions that apply.

Have you already spoken about the contract situation in the team?

So do you feel ready for the climb? Don’t you feel like you have to prove something in Moto2 first?

Does your height also matter? You are one of the tall drivers with your 1.78 m.

Yes. 2020 would be my fourth full year at Moto2. Now that we’re really at the top, I feel like I’m struggling with my weight. When you consider how tight Moto2 is, every detail counts. My weight really doesn’t help.

In Qatar it was pretty clear in the first half of the race that I had problems with the little extra weight when the tank was full. I lose in the acceleration, then the boys get close in the braking phase, I get involved in fights and just lose time at the start of the race. If everything pulls apart a little and there is less fuel in the tank, then I can come back strong. I think I showed a lot of potential there.

And when Fabio was still in Moto2, I also fought with him – on a Mistral, that wasn’t the best chassis in the world.

My height, weight and physique really fit the MotoGP bike. I’ve also ridden superbike machines. A few years ago I also competed in an IDM race on an R1. You gave me a standard R1 that I used to train at the Sachsenring. I remember having a very good time straight away. The bigger bikes suit me and I really feel like I’m ready.

You spoke to Fabio Quartararo: he never fought for the title in Moto2 and Moto3, but in the MotoGP he hit the mark in the first year. Is he perhaps a role model?

Yes, that gives you confidence. And it really shows you what level we have in Moto2. Fabio won a Moto2 race, in Montmeló … The level in Moto2 is just so high that maybe six or seven guys could get into MotoGP and perform extremely well there. Of course, some more than others – it’s about the driving style, body type and things like that. The problem is the lack of free spaces in the starting exhibition!

2020 should actually be an exciting year in this regard, because at the end of the season – with the exception of Tito Rabat – all contracts expired. Rins now signs with Suzuki, previously Marc Márquez (Honda) and Maverick Viñales (Yamaha) had extended, Fabio Quartararo was promoted to the Yamaha factory team in 2021. So there are still places available. But if there are no races, it is also difficult to draw a MotoGP team’s attention. How do you want to earn a place?

That’s a good question. It is also the first thing that went through my head when it all started. As I said, my goal is to ascend. But if there are no races, how can you show yourself? Will Dorna step in and say everything will stay the way it is for 2021? I dont know. That is hard. I also don’t know if the teams risk hiring a Moto2 rider after just one race in the 2020 season. Or will you look at previous results? I dont know.

I recently read an article that Ducati is interested in Martin. A driver could lose his place without even racing in 2020. That could happen. Hopefully my manager can open some of these doors.

Renowned driver manager Bob Moore, a former motocross world champion, has been looking after your career since last year. Have you had any discussions with MotoGP teams?

Your name already fell in 2019 when Johann Zarco and KTM parted ways earlier than planned.

Yes, KTM showed interest. Last year, however, I didn’t feel ready. The speed was there, we fought at the front …

But the consistency was missing? In 2019 there were no World Cup points for you in eight races.

I also had all the screws and plates removed from my legs in December, which was a big step forward. I had to take a month-long break and couldn’t walk for two weeks. It was a bit complicated, but now everything is fine.

I worked on turning my head on and thinking a bit more about things on the bike. I think that was shown in Qatar and in the tests. I am confident that there will be enough for the MotoGP teams to say, ‘He is ready for the climb.’

If you could choose a motorcycle for the rookie season in MotoGP, what would it be?

I think everyone would like to have a Yamaha. (He laughs.) The Petronas Yamaha seat is the golden ticket that everyone wants. But all of the manufacturers in MotoGP are great. It would be a dream to drive there.

Should you get a chance, will you take it no matter which team?

Yes, I would do it. Of course, you always want to try and get the best possible package. But it would just be a dream. And I think I could do a pretty good job with a less competitive bike.