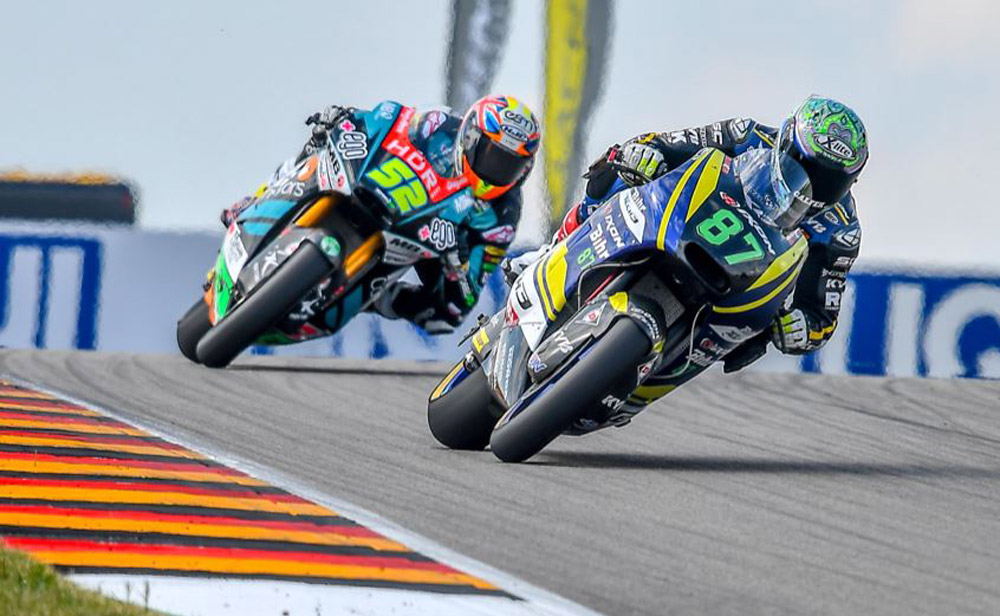 Remy Gardner was back in the Moto2 World Championship points earlier today after a stunning race saw the Aussie charge from twentieth on the grid to eleventh in this afternoon’s twenty eight lap #GermanGP at the Sachsenring.

Fast from the off, Gardner showed his true potential throughout the weekend running just outside of the top ten on Friday and as high as seventh in Sunday morning Warm Up but it was during the twenty eight lap race that he was able to truly shine.

The #87 Tech3 Moto2 Mistral 610 rider held position at the start before slicing his way through the pack to move into a point scoring position by the end of lap two.

By half distance he was up to thirteenth and involved in a multi rider fight for eighth.

Maintaining his pace Remy showed grit and determination as he continued his challenge forward, eventually crossing the line eleventh at the end of arguably his best race of the season in terms of overall pace from lights out to chequered flag – a mere second from the top seven!

Today’s result gives Remy a confidence boost before the season enters its second half in a couple of weeks.

Remy Gardner:
“I was disappointed in qualifying after being close to the top ten after FP3. Everyone raised the game and we kind of hit a wall. I knew that getting a good start would be key but with everyone having to use the hard tyre I was confident. I made an average start and just focused on keeping my nose clean. It was a decent race but the first ten laps it was hard to pass people. For sure a better qualifying would have helped but even so we did a good race and had a good rhythm. I didn’t quite make it to the front of the group I was in but I made some hard passes and was close to seventh which is encouraging. Definitely a positive way to end what was a positive weekend. Am looking forward to Brno where if we can fix qualifying I am confident of an even better result. Big thanks as ever to the team and all my sponsors and supporters!”