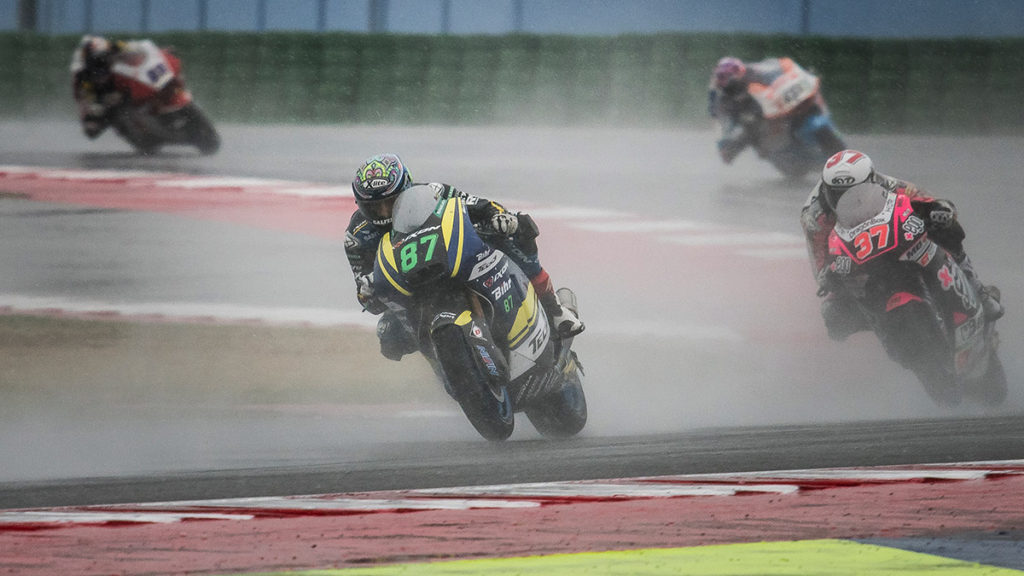 A steady start to the weekend saw Remy taking further steps forward in terms of on-track feeling, the Tech 3 Moto2 Mistral 610 rider eventually qualifying 21st much to the surprise of both he and the team who had expected him to place him significantly further up the grid.

Race day dawned with the threat of rain becoming a reality but confidence was high given the pace and result from the #87 in the Czech GP at Brno a few races ago.

5th in warm-up despite a small crash confirmed Remy’s pace, and after a steady opening lap he soon began to make progress in a race that saw only 16 riders classified as finishers.

8th by lap 4 Remy was looking odds on for another great result when unfortunately he slipped out of contention at turn 6 just after half distance. Not to be beaten, he rejoined the race after physically knocking the handlebars back into position. Still running comfortably inside the top 15 he crashed out again. Picking himself up for a second time he rejoined again to eventually finish a heroic 13th at the flag.

Remy Gardner – 13th:
“I was surprised to be 21st on the grid as we went much quicker than we had all weekend in qualifying and didn’t expect everyone else to improve so much. The warm up was encouraging although the track was slippery and I went down. What a race though! It’s a real shame that I crashed the first time as I think we had the pace to finish in the top 8. The second crash was unlucky, the data shows nothing strange so I guess it just wasn’t meant to be. Anyway, we got 3 points after two crashes in the same race which I don’t anyone could have predicted. What else can I say other than it was a long hard race that I didn’t think was ever going to end, but I can take the positives and move on to Aragon in a fortnight where I am confident I can improve both me and the bike a bit more.”