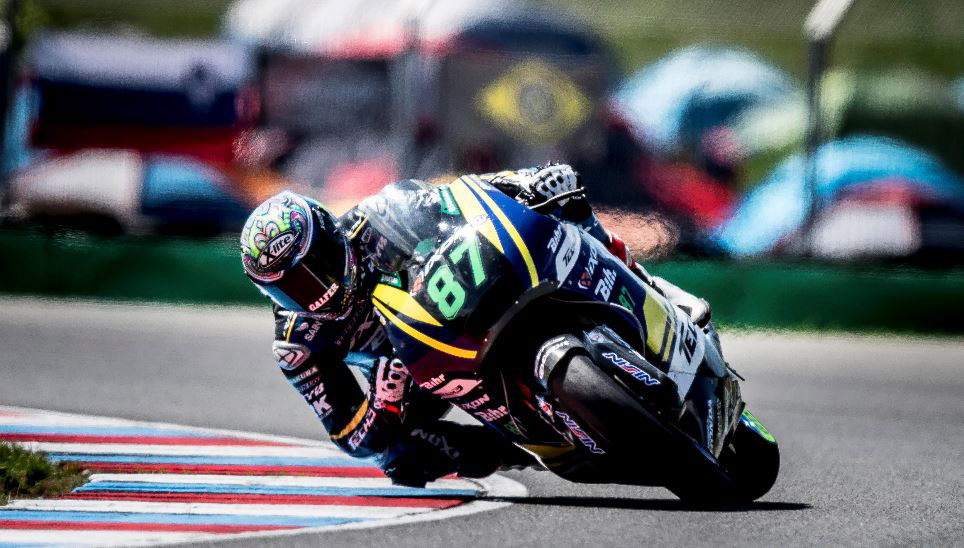 The tenth round of the Moto2 World Championship took place earlier today at the Brno circuit in the Czech Republic with Remy Gardner securing a placed finish in a two part race, stopped initially because of rain. The undulating 5.4km circuit has traditionally been the venue used for the first race after the summer break, and confidence was high ahead of today’s 20 lap race.

A wet and dry session on Friday provided valuable set-up time with the #87 eventually qualifying 26th after a frustrating grid deciding session saw him fail to match his lap time from the combined Free Practices.

With the threat of rain lingering overhead this morning, the race began dry with Remy immediately moving forward five positions on the opening lap. Settling into a rhythm, Gardner was making further progress when the heavens opened and after several riders fell causing the race to be red flagged.

After a short delay the race was restarted for a six lap ‘sprint’ with grid positions based on the overall standings at the end of lap 7 meaning Remy would line up 22nd.

A six lap race means it’s full attack from lights out and Remy didn’t disappoint, threading his Tech3 Mistral 610 through the field as in the first encounter to end lap one 17th.

Seemingly on rails, Gardner was soon inside the top 15 and by half race distance was in the fight for tenth.

Side by side action on the final lap saw him take the flag a fraction of a second behind the world championship leader to claim his best ever World Championship finish, a result that will surely give him a confidence boost enabling him to end the season on a high.

Remy Gardner – 9th:
“A small crash in FP1 wasn’t the way I wanted to return from the summer break but it was good to be back on the bike nevertheless. FP2 I struggled a little with the front feeling but the team and I worked hard and all in all it wasn’t too bad. FP3 was good and we made a big step but in qualifying I had no grip, and was a second slower than I went earlier in the day meaning 26th on the grid. Today was positive. I gained places in both starts but in the restart I felt much stronger from the get go and used my head to get my best ever GP finish. I crossed the line just behind Morbidelli who is leading the championship but we still have work to do. I’m extremely happy and already looking forward to getting back on my Tech3 Mistral in Austria next week. Thanks to all my team and to everyone who is supporting me.”

Round 11 takes place at the Red Bull Ring in Austria next weekend.